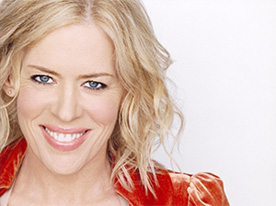 "Cynthia, your courage amazes me and is a true inspiration. You have been through so much."
—Jane Goodall

Founded in 2002, For Grace is inspired by the true-life story of our founder and spokesperson, Cynthia Toussaint.  A former ballerina, Ms. Toussaint has suffered, after a ballet injury, with Complex Regional Pain Syndrome for 38 years.  She now has 15 co-morbidities – and her most recent diagnosis was Triple-Negative Breast Cancer, which she beat in June 2020 using whole-body, integrative care.

Today, from her wheelchair, Ms. Toussaint champions awareness of the gender bias toward women in pain worldwide. Since her CRPS diagnosis in 1995, she remains active in the arenas of public speaking, writing, mass media (TV, newspaper, magazine, radio, Internet) and political advocacy for those who do not have a voice. She was the impetus behind the New York Times and Los Angeles Times first articles detailing her disease.  Also, she spearheaded the first-ever California Senate informational hearings about CRPS and the gender disparity toward women who experience pain.

Ms. Toussaint has been featured on The Discovery Channel, ABC World News with Diane Sawyer, NBC’s The Patient Channel, PBS, Discovery Health, TLC, Home and Health Worldwide and in AARP The Magazine, Newsweek, Woman’s Day, AOL.com’s homepage and on Maria Shriver’s Women’s Conference and Architects of Change websites, among others.

Her many speaking engagements include the National Institutes of Health, Capitol Hill and the World Health Organization.

She is the author of Battle for Grace: A Memoir of Pain, Redemption and Impossible Love. 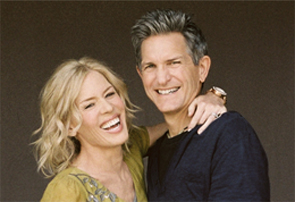 My journey as a woman in pain began when I was a 21-year-old ballerina. Up to that time, my life had been a love affair with performing and I knew I would have a long career in the bright lights of show business.

Then one day I suffered a ballet injury that changed my life forever.

That simple hamstring tear quickly turned into the most excruciating, burning pain I had ever felt. My leg turned purple and became swollen and cold while the torturous pain grew worse.

Compounding my horror, my doctors ignored my symptoms. For the next 13 years, they told me my condition was “all in my head”, dismissively diagnosing me with “stage fright” and “tendonitis from Mars.” One doctor said that because I was only a woman, it didn’t matter – I should just shoot myself in the head.

During these nightmarish years, my glamorous career slipped away, my family and friends left and I battled depression and suicidal ideology. I spent the next decade of my life bedridden. For five of those years I was unable to speak while the disease with no name spread throughout my entire body and ravaged my vocal chords.

My shining star was my partner John who stayed by me, whispering support all along the way. His love lifted me through the worst of times, his steady strength soothed my wounds.

Finally, I found a pain management specialist who diagnosed me with Complex Regional Pain Syndrome (and later Fibromyalgia and Chronic Fatigue Syndrome.) Though I quickly improved, my condition had progressed too far unchecked for a cure, leaving me in constant physical pain in need of a wheelchair. But at last I was believed and my pain had a name. With this information, I had a new focus.

My future is filled with the fight and ambition to bring the plight of women in pain out of the dark and help all those who suffer needlessly due to bias and ignorance. I never again want what happened to me to happen to another. That is my “dream of never again.”

Note: I am a cancer survivor. In 2019, I was diagnosed with Triple-Negative Breast Cancer caused by CRPS and the resulting family strife fallout. Despite my remission, I now have a passion for the pain-cancer connection, and my work is strongly reflecting that. 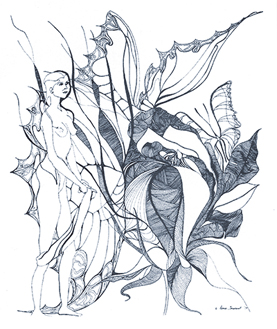 Shortly before chronic pain touched my life, my mother did this pen and ink drawing. I immediately fell in love with its shapes and lines and I knew it would become important in my life. It’s perfect, soulful beauty spoke to me—lyrical etchings swirling like a ballerina’s movement.

I knew she was “Grace.” My mother’s sister died years ago, long before I was born. Those who knew her always compared us. Our long legs and fair skin, our temperament and love of music. We spoke through the piano often as I keyed her faded notes off the sheet music.

I was told Grace’s passing came too early and with too much pain. She was only twenty years old, a life of promise quieted long before its blossom. I thought her an angel, pure and simple.

John and I always dreamed of having a little girl and naming her after my sweet Aunt. Our own simple and pure angel, filling our lives with light and love…

Slowly, after years of chronic pain heartbreak, I realized Grace and I shared more than others had thought. Life did not grace us with a primrose path or the warm hue of blessed destiny. But we were given greater gifts…

For Grace is named for the child John and I will never have. And for all the Grace’s that will be born to other women in pain who can have children once they’re diagnosed early, treated and cured.

And my mother’s drawing. It now speaks to me in different ways. The butterfly tells of hope and rebirth, the woman for our graces now and forever.

Aunt Grace would have liked that…and she pushes me on.