"How wonderful it is that nobody need wait a single moment before starting to improve the world."
—Anne Frank
Story
Celeste Hall 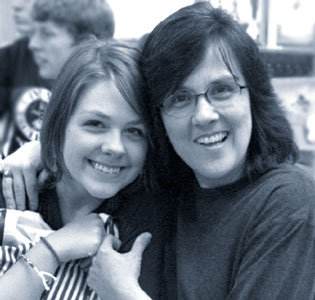 In 1982, I was thrown from a moving car.  I hit the ground with my right leg and twisted it like a corkscrew.  My ankle was crushed and my leg was broken.  I almost died two days later from gangrene.  The doctors put my leg and ankle together with steel and sent me to therapy.

A year later I began to have severe pain in my knee.  Two doctors told me I was just high strung and I would be fine.  Finally I went to a knee specialist and he told me my kneecap had been dislocated all that time, about two years.  I had knee surgery and therapy, then I began to have shocking electrical pain all up and down my right side.  After the sixth doctor had told me I was just an anxious woman and offered me Prozac, I surrendered in despair.  Someone convinced me to try once more and I saw a neurologist.  He told me, you are NOT crazy, you have RSD.  After 20 years and all those doctors calling me a nervous woman, this doctor believed me.  Sadly he told me there was not much that could be done, because it had been so long.

How does it feel to be suffering in silence while one medical professional after another suggests ever so gently that you are crazy?  It is like being alone on an ice floe in the middle of the Arctic Ocean, calling for someone to save you.  You realize that with every passing day, your hope is slipping away.  And you wish that one person would take the time to consider the possibility that you are a sane person with a real problem.

It is very hard to keep living with this pain, but I refuse to stop trying.  I tell my story to any woman I meet who is in pain.  I tell them not to stop trying, because although it was too late to help me, there WAS a doctor who finally said, you are as sane as me, and you have a real problem.  I only wish that these doctors who told me I was crazy could hurt this much for just one day.  I think it would turn them around and they would not look at us women the same way ever again.  Then maybe the next woman will get some help in time.  That is my wish.