"How wonderful it is that nobody need wait a single moment before starting to improve the world."
—Anne Frank
Story
Chelsea Janzen 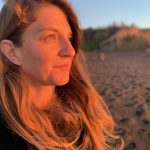 I am a young, active woman who was diagnosed with CRPS in 2017 following a soft tissue injury while working with animals.

Dealing with CRPS as a woman, through the workers comp system, has created many more problems and added hurdles in this battle. From getting pressured by doctors to return back to work too soon after the initial injury, to getting liability for CRPS and treatments denied, to having limited choice in doctors and having to wait many months to receive any help even with the help of a lawyer, to my CRPS progressing due to lack of care and early treatment, to my medical case being in the hands of one uninformed doctor who isn’t qualified in treating CRPS, which adds even more hurdles and time, etc.

My primary neurologist (who was a woman) gave me the diagnosis of CRPS on a post it note and I was told to google it, has laughed in my face when I asked for treatments such as psychotherapy and chiropractic care, saying “psychotherapy won’t cure CRPS!”,  has yelled at me for crying in her office, criticized me when I refused anti-depressants and other meds (I did at least try them), and has told me “you need to just deal with CRPS, go back to school, find a new career and get over it.” (I have since fired this doctor.)

I have finally said “enough is enough, I’m healing CRPS MY way!” I have literally just started this added part of my journey, but have reached out and found doctors on my own that look beyond the Western form of medicine and aim to help control the nervous system through a natural and multi- faceted approach. Something I would have never found if I continued in the workers comp system.

With CRPS, I have learned how important it is to take control of our health and not let doctors allow us to feel stigmatized or wrong about our pain. Staying grateful and finding things that make me feel powerful and strong, even on my weakest days, is how I get through my daily struggles with CRPS. (I know, easier said than done). We are not alone!
< Previous Post
Next Post >