"How wonderful it is that nobody need wait a single moment before starting to improve the world."
—Anne Frank
Story
Dana Wilson 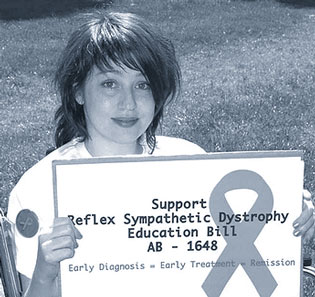 Six years ago, when I was 28 years old and in the peak of my career, I developed Reflex Sympathetic Dystrophy. I previously worked as a fashion and textile designer. I went from doing yoga everyday to being unable to walk. I am now 34 years old, I’m on permanent disability, and I have to endure scores of shots in my spinal cord through my neck and my back.

It started out with something as simple as heel spurs. The constant trauma of the heel spurs every time I walked sparked my RSD. I went to several podiatrists who couldn’t understand why I was in such extreme pain because, although heel spurs are painful, my pain was beyond what was normal. I finally went to another podiatrist who slightly moved my foot which caused me to scream and he told me he thought it could be RSD, although he knew very little about the disorder. After seeing him, I couldn’t walk for a month. I was very angry and thought he was a quack. I had never heard of RSD and I didn’t understand why he couldn’t find the problem and fix me so I could get on with my life.

After that, I went from doctor to doctor to doctor. I went to a pain management doctor who said absolutely, no question, I didn’t have RSD because he’d seen many cases. His treatment was several painful shots in my ankle and foot every two weeks. It was torture and I was getting worse but I trusted him because he was a doctor and he should know. After a year, the RSD spread into my hands and as an artist, this was devastating. I couldn’t drive to work and everyday at work was a huge struggle. It finally became impossible. My doctor kept telling me not to worry about a diagnosis because he didn’t have one but I needed to file disability to pay the bills. I was told that because there was no diagnosis, he wouldn’t give me disability because he didn’t want to get audited, although he agreed I was indeed disabled. I found out later he was billing my insurance for treatments I didn’t receive.

At this point, I started looking for a new doctor. Another doctor agreed I was disabled but he also didn’t want to be audited so wouldn’t give it to me. He also said it wasn’t RSD and said he couldn’t help me because he couldn’t find anything wrong. He wouldn’t do any tests on me because he said 40% of all tests are wrong anyway. Never mind that I couldn’t walk or use my hands.

Years were passing and my life was slipping away. I started thinking I was crazy. The doctors made me feel like I was crazy. I was barely leaving the house. I couldn’t pick up a glass of water. I had to crawl to the bathroom. I was becoming invisible, just a ghost of my formal self. I think I would have stopped looking for a doctor altogether except the pain kept driving me forward. I researched every medical disorder I could to find an answer and RSD was the only answer I could find.

Finally after three years and eleven doctors, I went to an incredible rheumatologist. He was actually willing to do tests on me to figure out exactly what I had although I think he already knew after the physical exam. I went through an intense couple of weeks of test to eliminate all other possibilities. After doing a three-part bone scan, he found that I did indeed have RSD as well as Fibromyalgia and arthritis. He gave me disability and put me in a comprehensive pain program at Cedar Sinai.

Now, although unable to work, I can walk for short distances. I can use my hands much more than before. I can type this story, which is an incredible improvement. The pain, while still there is so much more manageable. Through this process, we discovered that I have had Fibromyalgia since I was a child and went 30 years undiagnosed. I had all the classic symptoms and was very ill my entire childhood but no one could explain why. In fact, I had stopped going to doctors completely by the time I was 20 because I knew the outcome and every time I was told nothing was wrong with me, it stripped away another layer of my dignity. I chose to suffer in silence to protect my sanity but that silence has taken its toll on me.

While I feel I am lucky to have been finally diagnosed, I know that if I had received proper care earlier, I wouldn’t have lost my career and much of my childhood and my life would be much different. Although there is no cure at this time, if RSD is diagnosed within the first three months, there is a greater chance for remission. Sadly, this rarely happens due to lack of awareness. In fact, the average patient will see six doctors before finally being diagnosed. Unfortunately, people who suffer with chronic pain are invisible to the medical community and the general population.