"How wonderful it is that nobody need wait a single moment before starting to improve the world."
—Anne Frank
Story
Gail Williamson 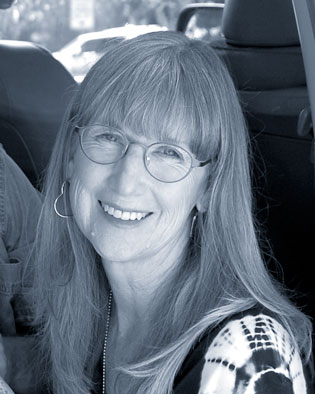 I first remember constant pain at about age seven. The pediatrician told my mom that I was the “sickest looking healthy kid in the practice.” He suggested that perhaps the pain in my legs was from growing. My mom believed in the pain and would rub my legs at night to help me get past it and go to sleep. Eventually I taught myself at a very young age to visualize removing my legs and laying them on the floor beside the bed at night so that I could get to sleep. I even remember a Girl Scout leader at camp rubbing my legs while I cried myself to sleep one time; she believed my pain as well.

This illusive pain continued through my teen years; again, the doctor suggested growth. I was on crutches for a period of time. About that time, I slammed my finger in a car door and for hours I refused to go to the doctor for fear they would send me home once again without recognizing my pain. My mom talked me into it when my little finger was bigger than my thumb and purple; I had broken two bones completely in half.

After my first son was born in 1975, the pain became worse so I asked my doctor about it. He told me I was a slight woman, probably meant to be a ” blue blood” and should not lift my baby, carry groceries and consider a life of “sitting on a pillow.” I tucked the pain away and went on again. After the birth of my second son in 1979, I was told by a different doctor, “You have an ache in your stuffing, Raggedy Ann.” Once again no one recognized my pain. I had the continued leg pain and often felt as if an anvil was tied by a rope around my waist. When I got worse it seemed as if gravity got stronger and was pulling me to the earth. I also experienced some extreme pain in my shoulder and under went physical therapy for some time and it seemed to just exacerbate the problem.

In 1996, I experienced such pain that I went to the doctor in a state of hyperventilation. I was hospitalized for a week with nothing showing up on any of the tests. They said perhaps I had Thoracic Outlet Syndrome and sent me home. I then went on living my life as I always had, ignoring the pain.

From 1995 on I just could no longer sleep at night for more than about two hours. Not just because of pain, but just because I couldn’t sleep. At that time we had taken in our six nieces after the deaths of their parents and I had nine people in a three bedroom, two bath house. There was nowhere to go at night when I couldn’t sleep. Everywhere would bother someone sleeping. I spent many nights on the bathroom floor reading until someone got up to use the bathroom.

I had more symptoms following a car accident where I was rear ended in 1997 and I also began to have migraine headaches.

In 2001, I was barely making it though the day, the fatigue was overwhelming. I would get up slowly each morning, having to rest after a shower before dressing. I would make it to work and come home at night and go to bed. Every weekend was spent on the couch; we used to call it a “Home and Garden” weekend since I would watch the Home and Garden Channel while I sat. One night my husband who had always been supportive asked me when I thought it might be necessary for me to quit work and go on disability. I said there was no diagnosis to support that thought. He then said that I must not be explaining it correctly because there was something real happening to me.

I once again went to my doctor, one I had never discussed these issues with. He sent me to a neurologist and I endured a battery of tests, some extremely painful. This ruled out most of the life threatening diseases that could be causing my pain and fatigue, for which I was grateful. At the same time my husband and I were searching the Internet for any answers and Fibromyalgia came up time and again. Even the little nuances of the disorder fit. One website reported some FM survivors startle easily and seem to over react when startled. I had been accused of this most of my life. My doctor agreed that it looked like FM to him and gave me a medication to raise my serotonin levels, had me join a group class on FM and sent me on my way.

The next year my doctor had moved and I went to see the woman who had replaced him. I was hoping that my report that my FM was about 60% better would lead her to find some additional or new treatment to help. Her response was, “Well, isn’t that great!” Not what I wanted to hear. She set me up with new and improved medication for my migraines and sent me on my way.

Little did I know that it was the migraines that would help me find better health. The medical group my doctor was a part of had a migraine clinic and they were reviewing pharmaceutical use of patients to find people to participate in the clinic. I was called and invited to participate. In 2002, I began being followed by the clinic and was given a cocktail of drugs that seemed to do a great deal for the FM as well as the migraines. The headaches did get worse upon occasion and the medications were changing and updated; some had side effects that I found to be more problematic than the headaches.

In 2004, I sought the help of a chiropractor who specialized in headaches. I was able to slowly reduce my medications as my treatment progressed. Today, I have mostly pain free or maybe low level pain days. I don’t recognize pain quickly and it can sneak up on me or just go unnoticed until I sit still and let myself feel my body at night. Then I may be rubbing some part of my body and wondering why it hurts, then remember, “Oh, of course, I have FM.”

I have been fortunate to always love whatever my job was. I love getting up and making a difference everyday. If I didn’t have that in my life I know that the FM would have beaten me down a long time ago. I also have a loving family who has always validated my pain even when the medical world did not. I feel like I have in some way benefited from this life experience. Okay, I might not say that on a bad day, but each chapter of my life brings its own issues, and when you close the book and look at the whole thing, it works for me.