"How wonderful it is that nobody need wait a single moment before starting to improve the world."
—Anne Frank
Story
Valerie Bellefleur 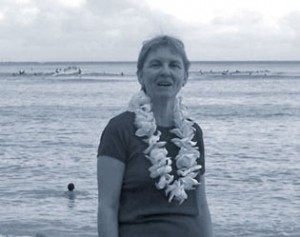 In 1985, while a Canadian living in Florida, I was riding my bicycle one day and suddenly had a quick urge to urinate, after which I had awful discomfort.  I kept urinating about every half hour with this strange soreness in the whole vagina.

Naturally, I figured it was a bladder infection and went to the doc.  After negative tests, he decided it was acute urethral syndrome and gave me antibiotics which proved useless.  During the next few months, the bladder pain increased and the urination was happening every half hour during the day with soreness.

I went back and again he turned me away with antibiotics.  Several months went by with no let up.  I went again to the doc who tested me for sexually transmitted diseases which turned out negative.  I went to the library and looked up my symptoms and decided that I could have a condition called Interstitial Cystitis, which is where the body attacks the lining of the bladder and is considered an auto-immune disease.  It’s fairly rare.

After six months, I was sent to a urologist who looked inside my bladder without anesthetic and told me I had scarring on the bladder.  He said this was not unusual for women who had UTI’s.  I was sent off with more antibiotics.  Over the months the pain and urination came and went.  I moved back to Canada and it seemed I was in remission until one day I ate a large bowl of strawberries.  The pain and urination came back with a vengeance.

I contacted a specialist who diagnosed me with Interstitial Cystitis.  He was quite surprised that I had actually already diagnosed myself.  He put me on anti-depressants and over the course of the past twenty some odd years, my condition is practically gone which is amazing considering this is an incurable disease.

I cannot emphasize how much pain I have gone through since the time this started – how I had to look up my symptoms on the Internet and take a print out to my doctor who had never heard of IC as well as the many nurses who didn’t know what I was talking about.  I am glad to see that this condition is being recognized after so many years, and many are not suffering as I did.