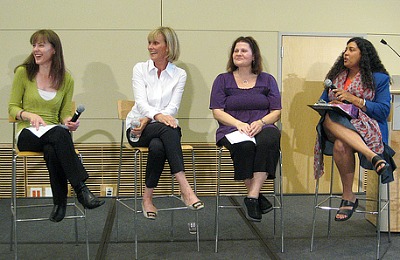 "No one can make you feel inferior without your consent."
—Eleanor Roosevelt

For Grace’s Women In Pain
Awareness and Education Project

Award-winning Website
The For Grace website is seen by more than 100,000 unique visitors annually and includes tools and resources to empower women to be better advocates for their pain care and wellness.

Archive of Resources and Research
We have gathered current, relevant research materials that support the fact that women are prone to chronic pain conditions, yet are underserved in their pain care compared to their males counterparts. These materials aim to educate the general public and media about this troubling trend.

Women In Pain Share Your Story Project
For Grace has collected more than 50 powerful and provocative real-life stories that provide comfort, aid and hope to women in pain through narrative therapy. More recent stories have focused on the connection between cancer and pain and how trauma has contributed to one’s chronic pain.

Policy and Legislative Action
In 2004, For Grace championed a California legislative informational hearing about the under-treatment of women in chronic pain (the first of its kind in the nation.)  Also, we support policy initiatives that overcome barriers to pain care. Accordingly, For Grace was the lead sponsor on a California bill that aimed to restrict Step Therapy, an unethical prescription practice used by the healthcare industry to save money in a way that increases the suffering of pain patients. In 2021, For Grace celebrated its 20th year in a row sponsoring California’s September as Pain Awareness Month. From 2017 to 2019, For Grace hosted a series of summits, the last being held at the California Capitol in Sacramento, which outlined the on-going treatment challenges people with high-impact pain face as well as a proposal for a Center of Pain Excellence in the state.

Women In Pain Petition and Bill of Rights
Women in pain, their families and caregivers can sign this statement advocating for better pain care and compassion, while sharing a testimonial of their fight to better pain care.

101 Wellness Ideas to Empower Women In Pain
For Grace has assembled these easy-to-do, empowering tools and resources to help women better manage their pain, improve their care and, ultimately, enhance overall wellness.

Women In Pain Book Project
Our founder Cynthia Toussaint’s stirring memoir, Battle for Grace, chronicles her 30-year journey with chronic pain. Told with unflinching honesty and bold content, Battle for Grace aims to start conversations about the unspoken truths of the pain experience while depicting a path to better wellness and personal triumph.

Empowerment Music Projects: Wonder and Crazy
Our founder, Cynthia Toussaint, has recorded two CDs, Wonder (2012) and Crazy (2021),  after losing her singing voice to CRPS for 15 years. These efforts are a testament to the healing power of music therapy and are dedicated to the perseverance and fortitude of women challenged daily by persistent pain. Both are nine song collections that capture the challenge of the pain experience while conveying the joy of reinvention and better wellness.

Annual Women In Pain Conference
Beginning in 2008, For Grace has hosted this annual educational event attended in-person and via worldwide webcast by women in pain and their caregivers. “For women in pain, by women in pain”, the conference features renown speakers and panelists who promote self-care practices that engage attendees to take control of their wellness. Understanding chronic pain and the health benefits of an effective treatment regimen, along with responsible adherence to therapies, is emphasized as well. For Grace’s 10th annual conference, slated for September 2021, will highlight the connection between pain and cancer.

Media Outreach
ABC World News Now, the Discovery Channel, The New York Times, The UK/London Times, Woman’s Day and More magazine are a few of the many media sources we’ve generated features in that have brought pain care gender disparity awareness to millions around the world.

Women In Pain Awareness & Education Action Team
For Grace has assembled a team of leading pain experts who can speak about the gender disparity issue from a personal, clinical and research perspective.

Women In Pain Public Service Announcement
Launched in 2008, this attention-grabbing PSA addresses the troubling issue that “women hurt more and are helped less.” It has reached tens of thousands worldwide via the Web.

Live Stream Shows in Partnership with The Mighty
In 2019, For Grace partnered with The Mighty’s worldwide community to educate, inspire and empower women in pain.  Founder Cynthia Toussaint hosted “Miracle Makers” and interviewed a different change agent each month, many who have survived impossible odds to go on to make the world a better place for women with high-impact pain. In 2020, “The Pain-Cancer Connection”, hosted by Toussaint, focused on how cancer treatment can often spark chronic pain and how long-lasting pain can often provide the inflammatory springboard for cancer development. In 2021, “The Trauma-Illness Paradigm”, hosted by Toussaint and For Grace director, John Garrett, explores how trauma (inherited, early childhood, and ongoing) can lead to toxic stress which in turn can cause chronic illness such as chronic pain and cancer.

For Grace founder and spokesperson Cynthia Toussaint is a consultant for many news outlets, including The Discovery Channel, ABC News, FOX News, National Pain Report and PainPathways magazine

Hosted in partnership with the Southern California Cancer Pain Initiative and City of Hope National Cancer Center, the first annual Women In Pain conference held in May 2008

For Grace founder’s story was a featured segment on Discovery Health’s “Mystery Diagnosis” which has aired worldwide since October 2005, reaching millions; this show has been picked up by The Learning Channel and Home and Health Worldwide

For Grace founder’s story was featured in the March 2007 issue of Woman’s Day magazine (article titled, “My Mystery Disease”) – which was seen by 20 million readers

In early 2004, For Grace founder, Cynthia Toussaint, championed the first-ever state legislative informational hearing that focused on the under-treatment of women and their pain conditions; to compliment this hearing, she had February proclaimed Women In Pain Awareness Month in CA

In mid-2007, For Grace expanded its mission to “ensure the ethical and equal treatment of all women in pain.”  This effort launched the circulation of an on-line petition (which has gathered 6500+ signatures and testimonials) along with a Women In Pain Bill of Rights

For Grace partnered with the Discovery Channel to produce a one-hour documentary, Pain Matters, in late 2013. For Grace leaders Toussaint and Garrett were featured in the film which provides the most comprehensive depiction of the chronic pain experience to date