"How wonderful it is that nobody need wait a single moment before starting to improve the world."
—Anne Frank
Story
Cam Auxer 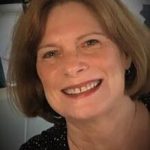 Cameron Auxer is the author of When Bodies Break: How We Survive and Thrive with Illness and Disability, and creator of the Pajama Daze (pajamadaze.com) and Live Well with Chronic Illness (livewellwithchronicillness.com) websites.  She resides in Peterborough, New Hampshire, USA.

June 3, 2018 I sat on the patio of Harlow’s, a popular Peterborough haunt, with the crowd of family and friends who helped me move into my new digs. I remember being a little buzzed from the drink I was enjoying, but even more buzzed from becoming a resident of a delightful, artsy, intellectually-stimulating and beautifully-preserved historic town. This was the second move I had made in a year after being displaced from my Pennsylvania apartment due to black mold. My lower back was sore from all the packing, lifting and carrying during the two moves, and there was a period of unpacking et cetera looming ahead for me.  But I was in a state of bliss and nothing could burst my bubble.

Or so I thought.  After lunch, while we were unloading the remainder of my belongings into a storage unit, as they wouldn’t fit in my tiny apartment, I got a phone call from my brother-in-law.  My sister, long suffering with severe pain from MS and other ailments, had taken her life after being refused pain medication by her doctor.

Two weeks later, as the grief settled in, I was confronted with a diagnosis of stage 1 ER-, PR-, HER2+, invasive and aggressive ductal carcinoma in my right breast.  I commenced treatments shortly thereafter.  It wasn’t a surprise; I had a suspicious mammogram the month before. But suddenly my emotional pain had to be quickly embraced then set aside to be able to deal with the second cancer to threaten my own life. The first had just required surgery; this would be a different journey.

I did well through the beginning of chemo and targeted drugs.  I didn’t get sick and was able to take mile-long walks down my sweet country road.  Most food tasted like hubcaps; I ate it anyway and kept my general health strong.  But as the weeks went on, my lower back became increasingly painful and my right leg, both numb and agonizing at the same time.  Eventually, I couldn’t take walks anymore.  I could barely walk around my tiny apartment without excruciating pain.

I hadn’t had the time to find a GP but thankfully, my medical oncologist referred me to an orthopedic surgeon.  My spine was a train wreck and the L1-L2 disc herniated and bulged so badly that it strangled the nerve bundle running through it.  I needed surgery, but had to get off chemo for four weeks beforehand.  Those weeks were pure torture, and though my doctor offered pain meds, I refused them after researching possible side effects.  I muddled through it by staying off my feet and finally, on October 22nd, I had back surgery and experienced immediate relief.  I had two and a half weeks to recuperate before going under the knife again to remove the cancer on my 64th birthday.

Even though other breast cancer survivors told me how painful their biopsies, placement of markers and surgeries were, I applaud my medical team for their surgical and pain management skills throughout the process. I consider myself lucky after knowing how my sister and so many pain patients have suffered because of the “opioid crisis” which has demonized traditional pain management.  I am also lucky to have a very high tolerance for pain.

I was given radiation at the beginning of 2019 and finished the targeted drugs that July. The fatigue from the treatments, especially radiation, hit me harder after they ended, and the grief surrounding my sister’s death finally surfaced and flooded me with emotional pain for weeks.  I still mourn my sister, but now the emotions are less intense.

I was recently diagnosed with fibromyalgia, after having occasional flares for 30 years, and am taking low-dose naltrexone for the pain. Getting out of bed is easier, but I began having more frequent, long-lasting and intense flares.  I finally realized that they began shortly after I started taking elderberry, so there is something autoimmune going on.  I’m getting tests for neurological and autoimmunity symptoms; some, like peripheral neuropathy, started before cancer but got worse; some new symptoms appeared after treatments ended.

In a weird sort of way, I see it as a blessing that I have weathered a parade of chronic illnesses, pain and cancer since childhood; as it was my normal, I learned resilience from a young age.  There was a period where chronic fatigue, a rare disease and heart attacks created a dark night of the soul.  But those struggles eventually fueled my patient advocacy and my zest for life.  I now celebrate being cancer-free and embrace my life! I’ve published a book and I’m learning to paint and play music, enjoying galleries and performances, and making new friends!  I am walking with ease, and yoga with my wonderful teacher, Peggy Cappy, is keeping my spine happy.

Even with illness and pain, we can live lives of purpose and passion.  We can be proud of our strength and resilience.  And we can lift others up in the process.

(You can learn more about When Bodies Break and how to purchase at https://www.livewellwithchronicillness.com/when-bodies-break.html