"How wonderful it is that nobody need wait a single moment before starting to improve the world."
—Anne Frank
Story
Lezli Kuntze 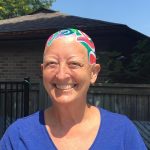 We make decisions every day. What to wear, what to eat. Make a right turn or a left. Every decision has consequences. This is the story of health decisions I made and the fateful consequences that resulted.

There are so many things that can affect your future health. Some risks are so small you don’t even concern yourself with them. Others, the percentages are given, and you weigh that against the alternative.

2002 – My story starts with what we know caused my first round of cancer. Over eighteen years ago, my husband and I were trying to get pregnant. I had faced many years of painful endometriosis and had a laparoscopy, only to have it return again. We were having no luck with natural conception and so went through IVF. They warn you that you may get hormonal breast cancer from the process, but the risk was low and if you breastfeed it’s lower still. The risks were there, we knew it, but we decided it was low enough and if we wanted children, this was the last of our options. In the end, the IVF process was not successful and it triggered a year-long asthmatic reaction to the intense hormone treatment.

It also triggered Vitiligo, a condition in which the pigment is lost from areas of the skin, causing whitish patches. My mother dealt with an extreme case most of her life. Although hereditary, it’s said to skip a generation. However, the stress from the IVF and the asthmatic reaction activated it in me. With only a few visible patches on my face and neck, I stayed out of the sun for two full years and it has gone dormant again.

2004 – Without any help from fertility treatment, we found out we were pregnant! We were blessed with a boy, and a year later, we were worthy of a second son. It was always my intention to breast feed, but knowing that it might lower the risk of cancer made it an obvious choice.

2010 – My sister was diagnosed with HER2 positive which is a breast cancer that tests positive for a protein called human epidermal growth factor receptor 2 (HER2), which promotes the growth of cancer cells. This was the cancer we were warned to watch out for. It’s highly aggressive and fast growing.

2014 – I was diagnosed with breast cancer.  It was tested for the type and it was HER2 negative and double positive breast cancer. It was found early and considered a very simple breast cancer. In my book, there is no such thing, just different treatment plans. After lumpectomy surgery and radiation, I was put on Tamoxifen, a drug prescribed for risk reduction of breast cancer. When I first received the diagnosis, the doctors thought I would need chemo, so we prepared the boys, 8 and 9 years old at the time, by planning a “colour mommies head with Crayola markers” on family movie night. Once the pathology came through after surgery, it was decided that chemo wasn’t required. We had prepared my youngest so well for the “fun” in the process, he cried with disappointment. Instead, we found hair chalk that allowed him to put a temporary pink swish in my hair, and we did so for the next 5+ years!

Year after year, I passed my mammogram with flying colors. I had pain, but it was from scar tissues. I was having side effects from the Tamoxifen. My weight, which had been up since having children, was escalating while on the drugs. Side effects from any medications can be difficult, but they are choices you need to make. Should I take the meds to lower the risk and deal with the side effects or not take them and raise the risks of the cancer returning?

2018 – There was a flu/intestinal bug going around. My husband and kids were afflicted so it was no surprise when I contracted it. The recurring pain in my upper gut had me concerned and I wasn’t eating well. We had planned an extended trip to Hawaii and I wanted to be better before leaving. My doctor said it was a stomach bug and, with some rest, it would likely be gone within a week.

What I hadn’t recognized is that I had begun to change my eating habits. The days leading up to our trip were painless and I was feeling better. So, off to Hawaii we went.

Airplane food isn’t the best option and you’re limited as to what you can bring aboard when traveling cross the border. I thought I was eating well, but as the day progressed, the pain returned.

Over the next few days, I was beginning to realize, the pain was a result of food sensitivity. The fats were triggering the pain, yet I had no awareness of it, yet. I was oblivious to the actual function and location of the gallbladder until I searched “Dr. Google” to see where the pain may be originating. I now had a very good suspicion that I was dealing with Gallstones, although, in the end, I was still somewhat wrong.

For the rest of our vacation, I found, as long as I had no more than two grams of fat in any five hour period, I did not trigger an attack of pain (which took 24 – 48 hours to subside.) It was the toughest vacation ever! Even the simplest of salads was a challenge. No dressing, no oil, just lemon wedges or something seriously fat free! Most breads are too fatty. Avocados, a food favorite, was also a trigger.

When I returned home, I had two different medical appointments. First, I went to see my doctor who sent me for an ultrasound and, low and behold, gallbladder sludge! Gallbladder sludge forms when bile remains in the gallbladder for too long. My options were surgery or to simply follow a special diet and it would likely go away on its own. Not being a fan of surgery that isn’t required, I chose a diet of two grams or less of fat per day. In hindsight, not insisting on a specialist with better knowledge of this condition was a big mistake. The second appointment was with my Oncologist and my annual mammogram, which came back clear! No cancer! YES! In the back of my mind, I was concerned that some of the pain may have been tied to a cancer recurrence.

January 2019 – I started a Facebook page sharing recipes and others would share with me their knowledge on fat free eating. Foods from scratch, lots of fruits and veggies, prepping foods without oils, dressings, marinades, etc. It was going along great!

March 2019 – I was feeling so much better! Huge difference! The doctor told me that I could start eating normally after the pain had been gone for a period of time. It had been two months so I decided it must be better! Day one of a normal meal, no issues. Day two, back to pain! I was so upset! Back to square one!

But this time, it never fully went away. It was a low and steady, sharp pain, every day and all day. The pain was getting worse. We decided a trip to emergency was in order. I was prepared to leave the hospital without my gallbladder if that was the source of my pain. The diagnosis from my blood work wasn’t adding up to gallbladder issues alone, so the doctor decided to open up the CT scan area to have a closer look. After 15 hours in emergency I received my results. Breast Cancer! I still had sludge, but the main concern now was the sizeable mass. My files were immediately sent to the Oncologist.

At nine the next morning, I got a call from the hospital. “Can you come in this morning?” Yikes! The good thing that came out of this was that they found the cancer. However, did the gallbladder issue trigger the cancer? I think it’s likely. HER2 sits dormant until triggered. My gallbladder pain was the trigger. That is what I firmly believe! Am I thankful for the pain? Yes and no. If it had been triggered already and I had gotten the pain back in control, I might not have known the cancer was growing until much later.

My next mammogram was not for eight more months. Still, I believe that the long term pain is what caused the body to trigger the HER2. All this, and still on Tamoxifen! At the day of the emergency room visit, I had three weeks left on my prescription. I stopped taking it!

That morning started a flurry of new scans, biopsies, tests and results. This time I had triple positive breast cancer, HER2 positive. This was a completely different and unrelated cancer to the first diagnosis. This is an aggressive, fast growing cancer. My Oncologist connected me with a Nutritionist immediately who helped get the pain under control in time for my chemo to begin. The rush began to get me a port, start me on chemo, and roll things forward as quickly as possible.

Our boys were now fourteen and fifteen. We told them at the dinner table, “Time to get out the old Crayola markers and start planning some artwork!” They were scared and disappointed, but it helped set the tone. We were all going to take this on with a smile and make the best of it as a family!

I also started a page to share my journey. My way of letting others know what a cancer story looks like from my eyes. The highs, the lows and anything I could share to help others understand.  We were going to keep this positive!

The week before chemo started, my eldest helped me shave my head. I wanted no part of hair falling out. We put aside the Crayola markers and moved to non-toxic face paints. We found some water-based face paints that would be perfect. To prepare for my first chemo, my youngest painted my head for the first time! A number of days later, a second time and then friends offered to join in. Forty-one head paintings later, I had completed my chemo, had my surgery and my hair had started to grow back!

In the meantime, we were getting such wonderful feedback, we decided to put a name to the head paintings and Healing Head Art was born. I have created a website and added a Facebook, Twitter, Instagram and YouTube page all under the same name. It’s been a wonderful, heartwarming way to cope with what would otherwise be such a difficult, lonely journey. There were in all over 40 people who, at one point or another, many times in groups, would help to paint.

Instead of being asked about my baldness, people admired and commented on the beautiful art that adorned my head. If I ever have to face chemo again, I know the first plan will be to set up a painting calendar!

Today, I have completed my main treatment plan. It has spread to my lungs and to my lymph nodes, but is currently under control. I will be on a lifetime of treatments (scans, doctor appointments, etc.), but am still smiling.It’s through the laughter, the smiles, my faith, my friends and my family who lift me up and help me walk this journey. I have made it! Life is good!

Links to learn more about Lezli…