"How wonderful it is that nobody need wait a single moment before starting to improve the world."
—Anne Frank
Story
Maria Socolof 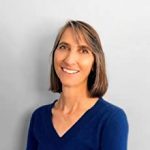 My chronic pain began when I was forty. It took me over two years, and many attempts to treat, eliminate, or reduce my pain, before I discovered trauma was a critical underlying force.

Why wasn’t my body healing, I’d wonder? I did what the doctors said. I tried painkillers, steroids, and traditional physical therapy, but my excruciating pain wouldn’t relent. I had neck surgery that reduced the shooting nerve pain from my ruptured disc, but the operation triggered burning debilitating pain in my neck and upper back. I couldn’t stand, sit, or walk for more than fifteen minutes without crumbling in pain. Again I tried painkillers, steroid shots, and physical therapy to no avail. My doctor suggested seizure medication, then an antidepressant, both of which were thought to be potentially effective to treat pain. They were not. Steroid-laden trigger point injections helped temporarily, so then I attempted moderate exercise. The pain crept back.

Finally, specialized myofascial release therapy helped my body expose hidden traumas that were keeping me locked in pain. Fear, anger, and shame were among the emotions that my fascial system continued to hold on to. Restricted fascial tissue was bearing down on my muscles and nerves to cause me physical pain. My brain was sending signals that it needed to protect me. It was still bracing against past traumas. At a subconscious level, I didn’t know I was safe.

Once these traumas and their link to my pain became evident to me, my pain dramatically decreased—permanently. But not completely. What is my body still holding on to? What is my brain still afraid of?

In the work I’ve done addressing my own traumas, I can specifically link fears and negative emotions to particular incidents in my life. Being molested (at age ten) and getting stuck in an undertow at the beach (at age five) are two significant ones. Then the surgery at age forty, triggering my underlying fears, re-traumatized me. Chronic pain ensued.

Studies show that adverse childhood experiences (ACEs) are indicators of adverse health effects later in life. The Centers for Disease Control and Kaiser Permanente conducted the original study on ACEs between 1995 and 1997. It included scoring an individual on ten ACEs, which were based on what approximately 300 Kaiser patients most commonly mentioned and on which experiences were well studied in research literature. The ten ACEs include physical, sexual, or emotional abuse, divorce, lack of basic needs, lack of emotional support, a battered mother, a substance-abusing parent or caregiver, a depressed or suicidal household member, or a household member who went to prison.

Interestingly, I score a zero for the ten items on the ACE list. The item on sexual abuse is only considered if there’s greater than five years in age between perpetrator and victim. So my worst childhood trauma apparently doesn’t count. Well, I can tell you it’s had a direct impact on my health. Regardless of how the ACE score is calculated for a particular study, many childhood traumas can impact health and well-being, as mine have. There also might be others I easily dismissed. I don’t know if the one time my father spanked me, which I clearly remember, or the fact that he was a little scary when he got mad, had an impact, too. Plus, later traumas can further compound those early traumas.

Now over a decade after my realization that my personal traumas were impacting my physical body, I’ve learned that generational trauma is also real. When I first heard this concept, I didn’t think it could be true. I surmised that what happens to one person is what happens only to that person. But now I understand epigenetics better. A growing number of studies support the theory that the effects of trauma can filter into future generations by affecting gene expression. Maybe my personal traumas were only the tip of the iceberg—piled on top of a base of generational trauma.

My eighty-four-year-old mother, for whom fear and anxiety have been life-long issues, has suffered with what she calls a mild case of fibromyalgia most of her life. She developed a severe case of sciatica in her early forties, which still periodically flares up. She got breast cancer at fifty-one. Bladder cancer at seventy-five. Did she have traumas that fed these ailments?

Her mother, my Italian grandmother, who lived until three weeks shy of her 100th birthday, was a nervous woman all her life. She was also laden with chronic pain. She’d often twist a dishtowel tightly around her head for relief. Her relatives nicknamed her “Mary Headache.” She also suffered with hip and leg pain that began when she was in her fifties and lasted the rest of her life. I remember her spending her last couple decades in a wheelchair because of that pain.

When she was five, she was traumatized when a boarder in her home molested her. She became very fearful. As she grew older, another fear weighed on her.

Her father was an Italian immigrant with anarchist views and she was in constant fear that he would be taken away and killed. He knew Sacco and Vanzetti—who were arrested in 1920 when my grandmother was ten, and executed in 1927 when she was seventeen. Their conviction and execution were believed by many around the world to be because of their political beliefs and ethnic background, not for murder—particularly in a case with questionable ballistics evidence.

Did my mother’s fears and physical ailments stem from my grandmother’s deep fears, plus whatever other psychological burdens my mother encountered in her life? Do my genes carry these fears?

And what about my father’s side? A stoic man of English descent, he didn’t seem to have any fears or emotional troubles. But what did his mother’s depression and ultimate suicide do to him? What did the suicide of her father do to her? Did their genes begin to express the traumas passed down over the generations?

Adding the traumas that may be stored in my genes to the traumas I experienced in my own life might be just the recipe for my very-difficult-to-reverse chronic pain.

Note: Maria Socolof is the author of The Invisible Key: Unlocking the Mystery of My Chronic Pain which examines the role trauma plays in her high-impact pain experience: https://www.amazon.com/Invisible-Key-Unlocking-Mystery-Chronic/dp/1734518901