"How wonderful it is that nobody need wait a single moment before starting to improve the world."
—Anne Frank
Story
Romona Johnson 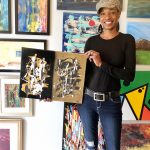 My name is Romona Johnson and I’m 58 years old. I have been living in pain with RSD/ CRPS for 16 years now. In December 2005, I had arthroscopic surgery that ruined my life as well as changed it.

At the time of the surgery I was put under, but was not given enough anesthesia. I heard the doctor’s whole conversation, speaking about his mistress and playing golf. When I woke after surgery, I pointed to my right knee cap. I let the surgeon know that he touched something inside my knee. He then replied, “If all of my patients felt this way during surgery, I’d go jump off a roof.”

I couldn’t believe it! He was rude, disrespectful, had no manners and didn’t care about me. As time went by, I was having a lot of swelling in my knee, along with discoloration, temperature changes (hot and cold) and stabbing pain. It felt like my knee and leg were on fire. I then ended up in the hospital for two weeks due to an infection in my knee. I had an allergic reaction to the medication I was taking, and it didn’t work.

My life had dramatically changed. I couldn’t walk or take care of myself. My son was there for me and it was an emotional drain on him. Mentally I was overwhelmed and just wanted answers. But I couldn’t get them.

In 2006, I went to another doctor who diagnosed me with Reflex Sympathetic Dystrophy, a chronic pain disorder. I had lost my job and couldn’t get the help that I needed. I then cashed out my 401k which I was saving to open a museum. My dream had vanished. I was depressed and couldn’t get proper treatment.

My son then said, “Mom, you need to paint!” He put the canvas on top of my bed along with paint and recycling materials. I began to paint beautifully while lying down. I was expressing on canvas what I was feeling living in constant pain. All the while, I was teaching myself how to relieve my pain by painting it.

Then a pilot from Florida flew me to NYU Medical Center to see if they could help me. I had many tests done. The doctors then called me into a meeting and said that my RSD/CRPS was too far gone for a cure. I then fell into a deep depression.

After that, a psychotherapist, Dr. Barbara Cook, read my story and she began to help me. She saved my life and gave me hope. I saw her for five years and she wouldn’t take a dime from me. I felt that she was my angel.

As the years went on, I couldn’t find relief for my pain. I tried acupuncture, SCS implant, hyperbaric chamber and Reiki. I couldn’t walk, stand, or sit for any length of time. My doctor referred me to physical therapy, but they couldn’t help. I couldn’t bend my knee, and due to it being a different color from the rest of my leg, they were afraid to touch me.

I was tired, but didn’t want to give up. I began painting again, donating my art to people with disabilities to help them. I also received awards for my paintings. Several of them were auctioned off to help people who were in need medically.

Then I met a Florida doctor from South Africa who understood RSD/CRPS. He told me to move to California as many physicians there specialize in chronic disease. Once there, I was referred to a doctor who was very helpful. I was painting while following my doctor’s every recommendation.

One day while at CVS printing pictures of my paintings, I met an elderly couple who asked if they could see my work. I gave them my business card, and later received a call from the Palmdale newspaper. The editor asked me if they could do a story. I was elated!

When the story ran, I went to the corner store and saw people outside with the article. My art and I were on the front page, and I felt like a star. I signed so many newspapers that I had tears of joy!

I have been living with RSD/CRPS for 17 years, and I thank God for my family who’ve been very supportive. Despite everything I’ve been through, I can honestly say that I wouldn’t wish this on anyone. Worst of all, I wasn’t compensated for what I believe was my doctor’s mistake.

So despite my many struggles, I’m alive and will continue painting. Hopefully one day, I’ll do a movie that will depict what I went through and how I was mistreated by several doctors for their lack of knowledge about RSD/CRPS.

I thank my son for truly being there for me as he was a lifesaver. He wouldn’t allow me to give up. And I’m not giving up as I love myself.

I’ve been discriminated against and mistreated. I’ve had enough! I’ll continue to stay in prayer and have faith. I’m going back to school to get my degree in fine arts because that’s what I enjoy. Painting helps me to escape living with RSD/CRPS.

Special Note: To find out more about Romona and her incredible art work to help others, please link here:
https://www.fox13news.com/news/artist-with-disability-sells-jewelry-to-help-others